Like Betsy from the Historical Food Fortnightly I decided to focus on a raising agent for the Revolutionary Food challenge, but where her recipe called for potassium bicarbonate (aka pearl ash) I used sodium bicarbonate. Sodium carbonate or soda ash had been in use as a leavening agent since its discovery in 1791 and continued in use into the mid-1800s, see for example the recipe for Buckwheat Cakes below, but sometime around the 1840s it began to be replaced by sodium bicarbonate and eventually baking powder. 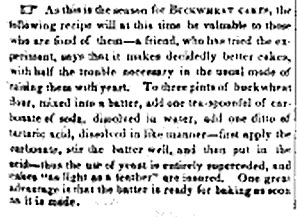 As far as I can find out, sodium bicarbonate was discovered by Valentin Rose in 1801 but wasn’t used on a large scale until commercialisation in the 1840s. Nonetheless, I found a reference as early as 1808 to “digestive bread” made with bicarbonate of soda[1], and indeed many of the later recipes stress the health benefits of bread leavened with bicarbonate of soda rather than yeast.

I can’t say whether bicarbonate of soda really made bread that was healthier for you, but it certainly offered a number of advantages to the home baker. Firstly, it could be used with soft wheat flours, that is flour that doesn’t contain enough gluten to have the strength to make good bread with yeast. Secondly it was much faster, in fact as soon as the soda and the acid (often yoghurt or buttermilk) come together you have a very limited time to get it into the oven. Thirdly it was a lot less work, contrary to normal bread soda bread should not be kneaded. Fourthly, it was suitable for cakes and biscuits too, giving a lighter, fluffier result than those made with yeast. Finally, it was also cheap, didn’t go off in the summer months, and required much less attention than a sourdough starter or ale-barm. For all of these reasons, the introduction of chemical leavening agents was revolutionary for bakers of all types. 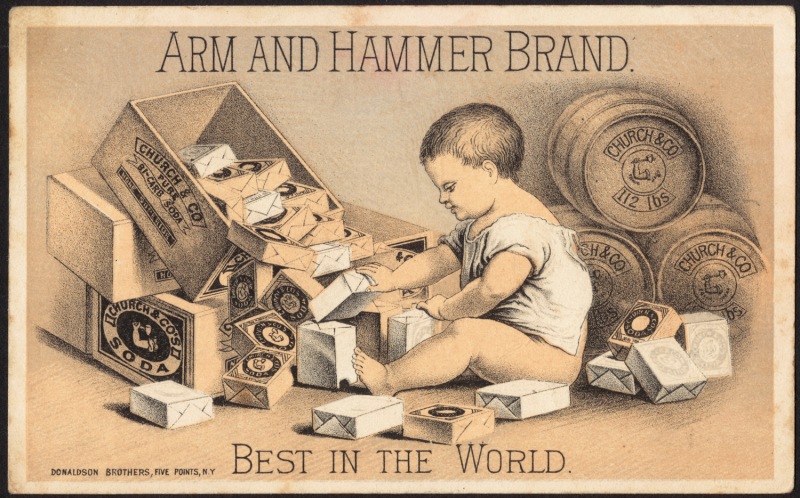 Brothers-in-law John Dwight and Austin Church were some of the first commercial suppliers of sodium bicarbonate in the USA, first selling their product in 1846. The two separated to set up their own companies, but these were re-united in 1896.  By Boston Public Library [Public domain], via Wikimedia Commons

Although many countries have their traditions of quick breads leavened with chemical agents (damper, pancakes, griddle cakes, farls, bannocks, scones, biscuits) I’ve always had a strong attachment to the quick breads of Northern Ireland. Visiting my grandparents there meant fried pancakes, potato breads toasted and dripping with butter, soda farls with an Ulster Fry and best of all, thick slices of wheaten bread, slathered in butter and ready to be dipped into Granny’s vegetable soup.

Ireland’s relationship with quick breads is linked to several key factors. The Irish climate has always been better suited to soft wheats, and soft wheats are not suited to being made into yeast breads. These quick breads are also more suited to being cooked over a fire, an important factor given that until the 20th century many houses lacked an oven. The introduction of bicarbonate of soda also seems to have coincided with The Great Famine of 1845-1852, and the woefully inadequate imports of wheat and cornmeal which were to relieve the hunger. Nonetheless, the demand for bicarbonate of soda greatly increased during the famine years so much that it placed pressure on suppliers to find new ways to produce it[2].

Unfortunately few Irish recipe books exist from this period so I have had to make do with an early English recipe from The Farmers Magazine although a nearly identical recipe is available in the 1847 Manual of Domestic Economy[3]. It is quite simple to do, although it does make a very large loaf so it may be worth halving the recipe.

The Recipe: Soda Bread from The Farmer’s Magazine (available here)

How did you make it? See above.

Time to complete?: Very quick to mix, maybe 1 hr all up.

How successful was it?: Not as good as real Irish soda bread, the odd shape made it too crusty, and it had a slight aftertaste of soda.

How accurate?: The way of cooking it was very different, but that was unavoidable in the circumstances. I’m not sure if the quantity of soda was off, but it had an odd aftertaste which I can’t imagine it should have had.

Timbs, John. Manual of Domestic Economy: By the Editor of “The Year-Book of Facts.” London: David Bogue, 86, Fleet Stree, 1847.