Distance view of The Hollow, Mackay ca. 1872. Mina’s first home after her wedding in 1872. Image from the State Library of Queensland.

Back to business now, and this week’s challenge “The Frugal Housewife”. One of my favourite frugal housewives has got to be Mrs. Lance Rawson aka. Wilhelmina (Mina) Frances Cahill. In 1872 Mina married Lancelot Bernard Rawson and she began her married life on ‘The Hollow’, an isolated cattle-station outside of Mackay in northern Queensland. In 1877 the family (by now they had 3 children) moved to ‘Kircubbin’, a sugar plantation near Maryborough, but the plantation went bankrupt just three years later and so the family moved to a fishing station called ‘Boonooroo’. This too failed and by the late 1880’s they were living at ‘Rocklands’ near Rockhampton where Mina became a social correspondent and swimming teacher.

Due to the family’s financial difficulties Mina had a variety of hobbies and crafts which she used to supplement the family income. She made mattresses and pillows (stuffed with seaweed or pelican feathers), kept poultry, gardened, smoked fish and made pelican muffs and necklets. Like Mary Hannay Foot, she also turned to writing; Mina’s first cookbook The Queensland Cookery and Poultry Book was published in 1878 while the family were living at Kircubbin. This was followed by The Australian Poultry Book (second ed. 1894), The Australian Enquiry Book of Household and General Information (1894), and finally The Antipodean Cookery Book and Kitchen Companion (1895). She also wrote fairy tales for the local newspaper, ‘The Wide Bay News’, and her memoirs were published in a series of articles in ‘The Queenslander’ from 1919 to 1923.

Mina and Winnie milking goats, undated. Image from the State Library of Queensland

Although life on the station must have been incredibly difficult, Mina approached it with a grace, resourcefulness and sense of humour that you can really feel in her writings. The preface to her book The Antipodean Cookery Book and Kitchen Companion explins why young women should learn to cook, for “The husband is a creature of appetite, believe me, and not to be approached upon any important matter, such as a new bonnet or a silk dress, on an empty stomach.”[1] As well as providing useful advice for young married women, Mina also staunchly advocated the use of native Australian ingredients and remedies, whether dugong bacon, wallaby soup, roasted iguana, parched grasshopper or rosella pickle. She used native vegetables to ward off scurvy and eucalyptus and tea tree leaves to treat various ailments.

Rock Wallaby in Rocks. By Bilby (Own work) [CC-BY-3.0], via Wikimedia Commons.  No wallabies were injured in the making of this recipe!

In spite of the sometimes exotic ingredients, the majority of Mina’s recipes are simple and quick, using only the most basic ingredients. Many also make use of left-overs, perfect for any frugal housewife, and I was struck by several of her recipes which use up mashed potato. Whilst I would like to try her recipe for Potato Cheese Cake which contains mashed potato, butter, eggs, lemon juice, brandy, currants and sugar I have yet to figure out exactly what it is supposed to be. It has no flour nor any type of cheese and it doesn’t seem to be shaped or baked (there are no instructions after heating it all up and adding the flavourings) so I am quite stumped as to why it is called a cheese cake.

Instead I chose the recipe for Potato Corks because I thought “Hey! I can eat potato gems and claim that they are Victorian!”. Sadly it was not to be. Instead of the mouthfuls of crispy, fried, potato-y goodness they were more like Irish potato bread in terms of texture, and quite plain in flavour. I also really struggled to shape them as corks, I added flour to the mixture and rolled the corks in even more flour to try and get them to hold a shape but it was very fiddly and not all that successful.

Potato Corks – Ingredients: 1 pound of mashed potato, 1 ounce butter, 5 eggs, salt, nutmeg, 1/2 teaspoonful sugar, 2 tablespoonfuls cream, flour to roll in. Mode: Rub the potato through a sieve into a basin, stir in the butter, the seasoning, the yolks of the 5 eggs, and lastly the cream. Turn this mixture out on to the floured board and roll it into cork-shaped pieces about three inches long and half as thick. Let them stand for a little while, then fry in butter or good dripping, browning them on all sides.[2]

All in all, although I think that the use of leftover mashed potato is frugal, the time it takes to shape the corks and fry them in batches and the amount of mess it made makes me think that this was less simple that it initially appeared. Nonetheless, it is certainly possible in even the most basic of kitchen shacks.

A pinch of nutmeg

Butter or dripping to fry 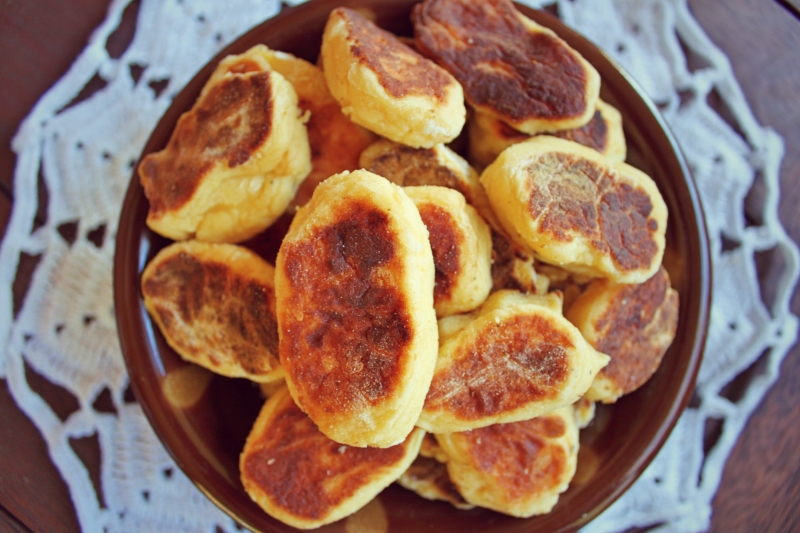 The Recipe: Potato Corks from The Antipodean Cookery Book and Kitchen Companion by Mrs. Lance Rawson

How did you make it?: See above

Time to complete?: About 40 mins, not including boiling the potato.

Total cost: I already had all the ingredients.

How successful was it?: A bit soft and floury, rather plain. Somewhat similar to homemade potato bread.

How accurate?: I had to change the recipe a bit just to be able to shape the dough, and I also added some pepper which wasn’t listed in the original ingredients, but even with that it was quite plain tasting. Mine were also significantly smaller than the 3 inches by 1.5 inches suggested in the recipe, just because I was struggling to shape them. Other than that reasonably similar, I even used dripping to fry them in.

Read more about Mrs. Lance Rawson here or about the Rawsons and other early pioneer families in Queensland here

You can read most of Mrs. Rawson’s memoirs on Trove, try here or here to start. She also wrote two series on keeping poultry called Poultry Notes and the Poultry Yard , the first installment of which you can read here.